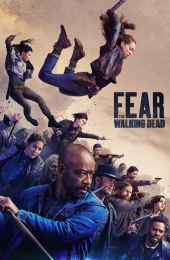 What did the world look like as it was transforming into the horrifying apocalypse depicted in "The Walking Dead"? This spin-off set in Los Angeles, following new characters as they face the beginning of the end of the world, will answer that question.
Episode Runtime: 43m First Air Date: 2015-08-23

Sheriff's deputy Rick Grimes awakens from a coma to find a post-apocalyptic world dominated by flesh-eating zombies. He sets out to find his family and encounters many other survivors along the way.
Episode Runtime: 42m First Air Date: 2010-10-31

Two Mexican-American sisters from the Eastside of Los Angeles who couldn't be more different or distanced from each other are forced to return to their old neighborhood, where they are confronted by the past and surprising truth about their mother’s identity.
Episode Runtime: 30m First Air Date: 2018-05-06

Verbotene Liebe is a German television soap opera Verbotene Liebe was initially based on original story and character outlines from the Australian soap opera Sons and Daughters, before evolving into a show of its own as the series progressed. The show originally focused on two core families: the wealthy Anstetten family and the middle-class Brandner family. More specifically, it dealt with the story of Jan Brandner and Julia von Anstetten, two strangers whose fascination for each other leads them to fall in love, neither of them cognizant of the fact that they are twins separated by their parents. It is this story of forbidden love that gave the series its title.
Episode Runtime: 25m First Air Date: 1995-01-02

The story of two vampire brothers obsessed with the same girl, who bears a striking resemblance to the beautiful but ruthless vampire they knew and loved in 1864.
Episode Runtime: 43m First Air Date: 2009-09-10

The plot follows detectives Karl Roebuck and Elise Wasserman working together to find a serial killer who left the upper-half body of a French politician and the lower-half of a British prostitute in the Channel Tunnel, at the midpoint between France and the UK. They later learn that the killer—who comes to be nicknamed the "Truth Terrorist"—is on a moral crusade to highlight many social problems, terrorising both countries in the process
Episode Runtime: 42m First Air Date: 2013-10-16

True Blood is an American television drama series created and produced by Alan Ball. It is based on The Southern Vampire Mysteries series of novels by Charlaine Harris, detailing the co-existence of vampires and humans in Bon Temps, a fictional, small town in northwestern Louisiana. The series centers on the adventures of Sookie Stackhouse, a telepathic waitress with an otherworldly quality.
Episode Runtime: 60m First Air Date: 2008-09-07

When a former high-ranking NYPD officer becomes the first female Chief of Police for Los Angeles, she uses her unflinching honesty and hardball tactics to navigate the social, political and national security issues that converge with enforcing the law.
Episode Runtime: 43m First Air Date: 2020-02-06