Follows six lesbian friends in Los Angeles through a summer of competition in friendship, romance, fashion and, most important, surfing.

Gimme Sugar is a lesbian reality show following five lesbian and bisexual women as they attempt to launch a ladies club night in Los Angeles. It airs on the Logo Network. One of the writers, Michaline Babich, was named one of 10 Amazing Gay Women in Showbiz from POWER UP in 2008.

The main cast members are Charlene Borja, Bathilda Hsu, Davonee Sou, and Alex Thomopoulos. Alex is the only bisexual woman out of the five.

The show started in the summer of 2008 with six half-hour episodes. 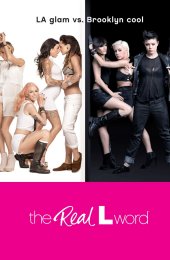 This sexy reality series features a fascinating group of smart, gorgeous, and fiercely successful LA ladies ready to make the scene with their uniquely captivating stories and sizzling drama. From love and lust to family and career, these women know what they want and just how to get it.